Escape from Exeria for RISC OS

About Escape from Exeria

Escape from Exeria is a game for RISC OS computers that was originally written around 1990, which was rewritten a few years later to make it compatible with the Acorn RiscPC, and to add improved graphics and sound and a new aspect to game play to make it more challenging. It has recently been updated again with new graphics and sounds, twice as many screens, and a another new challenge for the player on the new levels.

In the game, you must navigate each of the forty eighty screens collecting items and avoiding the guards, who want to stop you from getting away.

No one knows what it means, but everyone agrees that:

Your cries of innocence have gone unheard, so as a last ditch attempt at freedom, you have decided to try to escape!

The current version of Escape from Exeria, released in 2021 features new sound effects and newly designed graphics and runs in a 16 million colour, full-HD (1920x1080 pixel) screen mode. There are eighty challenging mazes, doubling the number from the mid-1990s version, with the guards on the new levels gaining a new ability to make them even more challenging for the player.

The mid-1990s version has forty challenging mazes, and runs in a 256 colour screen mode at either 800x600 pixels (RiscPC version) or 640x256 pixels (RISC OS 2 to 3.1 version). As well as newer graphics and sounds from the previous release, it also gave the guards a transformation when a certain point was reached on every level, to make the game more challenging over the older version. 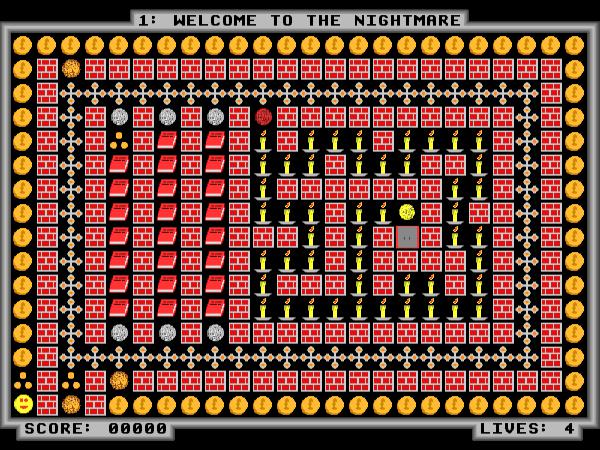 1994 RiscPC version, modified to run at 1920x1080
(16 million colours) with the draft graphics for
the rewrite currently in development.

There are different versions of Escape from Exeria offering compatibility with different platforms running RISC OS.

The 2021 release is compatible with all RISC OS computers that are capable of running a 16 million, 1920x1080 pixel screen mode. This should mean every new hardware platform that runs RISC OS 5 since the IyonixPC, as well as older machines running under emulation via VirtualAcorn and RPCEmu. It will not run on actual hardware running earlier versions of RISC OS due to their lack of ability to run at that resolution and colour depth.

The 2021 release of Escape from Exeria is available to buy online for £5.00. If you wish to buy it directly from your RISC OS computer, you can do so via the !Store application - delivery will be via the app itself once R-Comp have processed your payment. If you'd rather buy it via another platform, you can do so from the Soft Rock Software Ko-Fi Shop - delivery will be an immediate download from the Ko-Fi website.

The original 1990 RISC OS version is not currently available.